In 2012, TQ Delta acquired a key patent portfolio from Aware, Inc., a pioneer in the development of multicarrier communications technology and key participant in international standard bodies. Initially developed with a primary focus on digital subscriber line (DSL) technology, the most widely used residential broadband access technology in the world today, the portfolio encompasses innovations that have subsequently been adopted by a wide array of communications standards and systems. All DSL services throughout the U.S., Europe and Asia rely on standards based on technologies developed by TQ Delta and Aware.

All DSL services throughout the U.S., Europe and Asia rely on standards based on technologies developed by TQ Delta

DSL technology and services have evolved from the multi-megabit ADSL2 and ADSL2+ of the early 2000s to the VDSL2, Bonded and G.inp versions that today deliver speeds up to 100 Mbps. Devices have become increasingly sophisticated as network access multiplexers (known as DSLAMs) support multiport and multi-standard operations. At the customer premises, devices have transitioned from simple modems to broadband gateways and integrated access devices (IADs) that support advanced triple-play services in the home.

The patented technologies in the TQ Delta portfolio cover key innovations in DSL, including:

TQ Delta has continued Aware’s legacy as a technology pioneer, expanding the depth and breadth of the technologies and related patents and maintaining significant participation and membership at the International Telecommunications Union

Since 2012, TQ Delta has continued Aware’s legacy as a technology pioneer, expanding the depth and breadth of the technologies and related patents and maintaining significant participation and membership at the International Telecommunications Union (ITU) – the standards body that establishes worldwide standards for DSL. Broadband residential services from AT&T, Qwest, Centurylink, British Telecom, Deutsche Telekom, France Telecom, and carriers across Asia and the rest of the world rely on these standards and the technologies from TQ Delta that are incorporated within them. TQ Delta has ongoing investments in these key technologies for even faster and more robust networks of tomorrow.

DSL technology, deployed in customer premise equipment (CPE) and central office equipment (CO), is by far the most widely used broadband access technology in the world. DSL is a leading broadband solution in the U.S. along with cable and fiber and is the dominant market leader in other developed regions such as Western Europe, Japan, and Korea. This reliance on DSL in Asia and Europe makes the TQ Delta portfolio’s international coverage particularly significant. In mature regions, a replacement cycle is underway with VDSL2 replacing ADSL2/2+ in most installations. VDSL2 is the preferred rollout technology and will continue to increase rapidly in newly developing regions. In addition, G. Bond, G.inp vectored ports and newly emerging G.Fast have increased rapidly since 2015 and are expected to continue to be a key area of growth and investment in fixed broadband equipment around the world as providers and consumers demand even higher throughput and reliability. 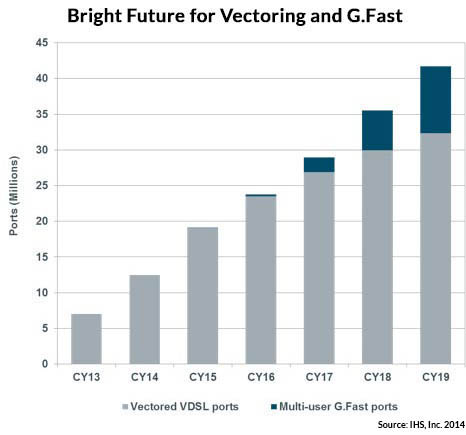 TQ Delta is committed to enabling access to market participants who wish to purchase licenses to practice its DSL standard essential patents (SEPs) in accordance of one or more licensed standards. TQ Delta offers licenses under fair, reasonable, and non-discriminatory terms. The following table illustrates a range of royalties for licenses to TQ Delta’s DSL SEP portfolio for certain currently identified xDSL standards:

For more information about TQ Delta’s patent portfolio and specific licensing terms for your use, please complete the form on our Contact Us page and you will be contacted by a member of our licensing team.